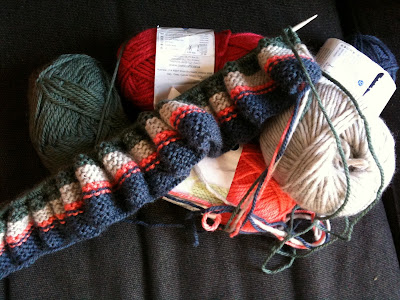 DIY Project 5 – Update
It was in the ‘maybe’ to do list for October, but it quickly became top of the list. As it started to get chilly and dark early in the evening I felt like I needed some kind of activity to do snuggled up on the couch under a throw in front of the tv. And there it was knitting a striped blanket working in garter stitch.
I’m using a very easy pattern of 3 rows, and multiple of 3, changing the colour as I feel like….no plans, just what I think it works best next.
So far, so good, except some initial mistakes…..
//the first one row of orange yarn was not supposed to be there, but let’s pretend it was done on purpose.
//I slowly mastered the art of adding a new yarn to the work, meaning the passage from one colour to another for the first few colours was not done properly.
The only problem so far…I might run out of yarn sooner than expected!